All disciplines have their personal jealousies, their leading lights and their enfant terrible. In the relationship between Eileen Gray & Le Corbusier we get all three and then more besides. In this relationship we get ‘territorial markings’, obsession, a desire to possess, to obscure, and possibly to obliterate. Eileen Gray was born in Enniscorthy, Ireland […] 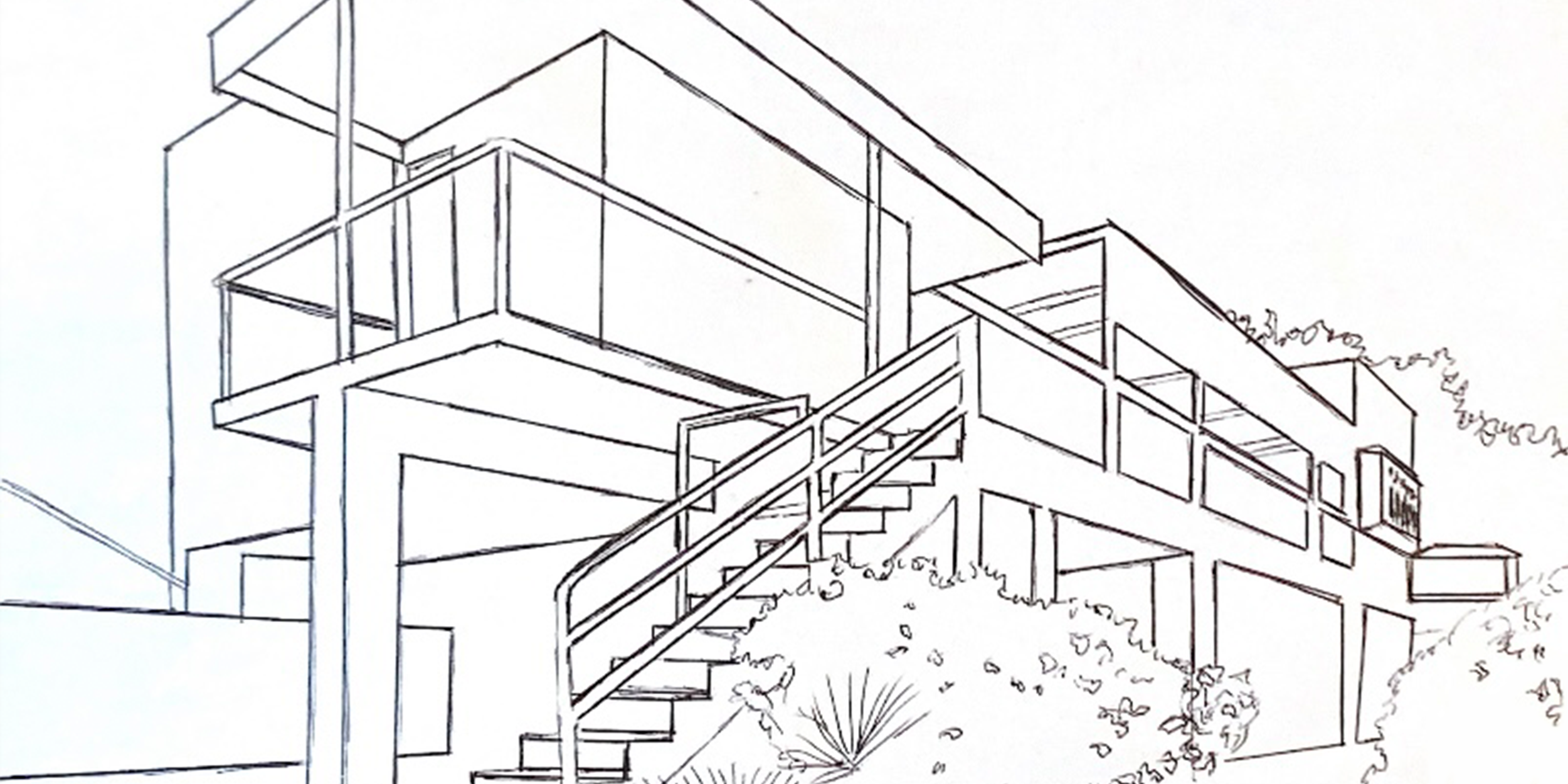 All disciplines have their personal jealousies, their leading lights and their enfant terrible. In the relationship between Eileen Gray & Le Corbusier we get all three and then more besides. In this relationship we get ‘territorial markings’, obsession, a desire to possess, to obscure, and possibly to obliterate.

Eileen Gray was born in Enniscorthy, Ireland in 1878. After studying at the Slade and then working as a lacquer artist, she turned her hand to interior design and architecture while living in Paris in after in the 1920s. She opened a shop in Paris and won praise for her interior designs for wealthy & fashionable Parisians.

A non-conformist at heart, Gray was nonetheless heavily influenced by fellow modernists such as Walter Gropius, Mies van der Rohe, and Le Corbusier. Between 1926-9 she designed a remarkable modernist villa in Roquebrune-Cap-Martin in southern France with her lover, Romanian-born architect and magazine editor Jean Badovici. In naming their house, E.1027, Gray chose a streamlined numerological symbol for her relationship with Badovici: “E” was for “Eileen,” the “10” and “2” represented Badovici’s initials—according to their place in the alphabet—and the “7” was for “G,” so that Gray was, in a sense, embracing him: E.1027.

In their choosing to name their house after their intimate relationship, Gray subtly distanced herself from a central tenet of Le Corbusier’s philosophy. For him, houses were ‘machines for living’ and this statement underpinned his angular, linear and cold approach to architecture and urban planning. Gray’s love declaration marked her approach as one that took emotion and feelings into account in the design and construction of a dwelling. She insisted that a house:

“is not a machine to live in. It is the shell of man, his extension, his release, his spiritual emanation.”

This divergence of view did not initially prevent Le Corbusier from lavishing praise on E.1027. After staying in E.1027 he wrote to Gray that,

“I would be delighted to relate how much those few days spent in your house have made me appreciate the rare spirit that dictates all of its organization, both inside and outside, and has given the modern furniture and equipment a form that is so digniﬁed, so charming, and full of wit.”

However, Le Corbusier had an increasingly troubled relationship with Gray and the E.1027 house itself. Le Corbusier emerged to be perhaps the leading light of modernist architecture and town planning, and for most of the twentieth century was by far better known than Gray as an architect. His influence on modernist design was immense and was acknowledged by Gray in her design of E.1027. However, Le Corbusier appears to have developed an unhealthy obsession with Gray’s E.1027. He tried to buy the house himself, and when frustrated, bought land overlooking the house where he built a wooden cabin in the 1950s. He would also swim beneath the rocks on which E.1027 was perched, having a near death experience when his leg was savaged by the propeller of a fishing boat. Indeed, Le Corbusier died of a heart attack while swimming adjacent to E.1027 in 1965.

Not long after she had completed the house her relationship with Badovici deteriorated and Gray built herself another iconic modernist villa, ‘Tempe à Pailla’, nearby. A frequent visitor to E.1027 in her absence, in the late 1930s Le Corbusier began painting a series of “purist” murals (which are said to have been influenced by Picasso’s Guernica) on the walls of E.1027, apparently without even the acquiescence of Badovici. Gray was immensely angry at what has subsequently been called vandalism, and she never returned to E.1027. Le Corbusier appears to have taken vicarious ownership of the house and returned regularly to work on the murals, adding the date of each new addition, even as late as 1962. When Badovici died in 1956, Le Corbusier persuaded a friend to buy E.1027, possibly to protect his murals rather than Gray’s legacy.

It has been suggested that Le Corbusier’s murals represented his frustration at his failure to posses Gray as a lover and subject. He admitted that Gray was one of the naked women in the murals and many have seen these murals as an expression of Le Corbusier’s psychosexual obsession with Gray. To compound this assault on Gray’s personage, Le Corbusier would seek to downplay Gray’s contribution to the design of E.1027 in his own writings.

Despite Gray’s debt to Le Corbusier, which was clear in E.1027, in her furniture Gray’s originality is clear. In many respects her rejection of Le Corbusier’s conception of houses as “machines for living” – his harsh, angular approach – is found in her rounded, more profound approach and is perhaps evident the softer, more naturalist lines of her furniture designs.

Gray is now recognized as having produced several classics of modernist furniture design. The first is her art deco like Dragons Armchair, an original sold at auction for a world record of £28 million in 2009.

Eileen Gray’s Bibendum chair contrasts sharply with Le Corbusier’s contemporary LC2 chair. The Bibendum is rounded, softer and more playful in design and realisation. In many respects it departs from the strictures of modernism as defined by Le Corbusier.

In contrast, the LC2 chair is more linear, straighter and austere. It is functional but hardly playful.

A similar contrast in style is evident in tables designed by Gray and Le Corbusier. Gray designed the Eileen Gray Table for the E.1027 house. A novelty of the table is that it is adjustable, so that it can be used as a bedside table or elsewhere. The raised, flanged edges were designed to prevent toast crumbs falling onto the bed. Functional yet beautifully designed, it is a twentieth century design classic.

In contrast Le Corbusier’s LC10 coffee table, designed in 1929, is a fixed height and somewhat limited to being a coffee table alone. A separate LC10 dining table was also designed.

In many respects Gray’s E1027 side table better meets the modernist requirement of form and function more clearly than Le Corbusier’s LC10 table. The E1027 is more versatile, while being a stylish classic.

Le Corbusier’s obsession with Eileen Gray and E.1027 may have had much to do with his recognition and jealousy of a rival genius. Her sexual unavailability may have also plagued his psychology to the extent that he had to symbolically possess her while simultaneously obliterating her. One irony is that while Le Corbusier’s star has the waned, Gray’s is in the ascendant. She is the subject of a forthcoming movie, The Price of Desire, starring Winona Ryder as Eileen and Alanis Morissette as her lover, and recently she has had retrospectives at the Victoria and Albert and the Centre Pompidou. Posterity may yet rescue Eileen Gray from Le Corbusier’s clutches.