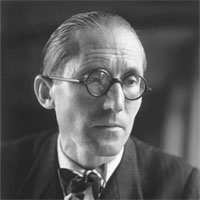 A contemporary of another pioneer of modern architecture, Mies van der Rohe. Charles-Édouard Jeanneret-Gris (or Le Corbusier) was born in the Jura Mountains, Switzerland. After working across Europe, Le Corbusier became an influential, if controversial, proponent of modernism and the skyscraper.

After attending art school he travelled and worked extensively throughout Europe, picking up influences wherever he went until the outbreak of war in 1914, when he returned home to take up a teaching post.

After the Great War he emerged as one of the leading theorists of modernist architecture and in some respects he is the father of the modern skyscraper, with his radical plans for ‘cities in the sky’ as a solution to the problem of urban slums and town planning. As with other modernists, his design ethic favoured simple lines realised using modern materials and manufacturing processes.

This design ethic was also reflected in his designs for the furniture of his buildings in the late 1920s. The LC1, LC2, LC3 and LC4 are tubular steel chairs, mass constructed, and are widely considered to epitomise early twentieth century modernist furniture design.